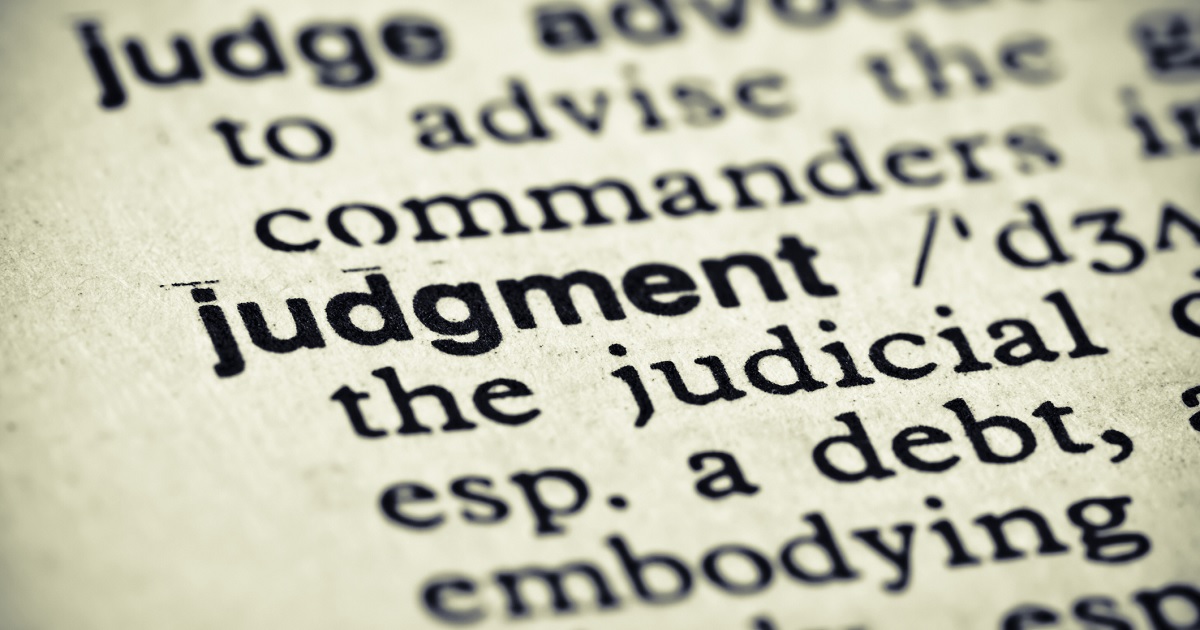 On "Worldview Wednesday," we feature an article that addresses a pressing cultural, political, or theological issue. The goal of this blog series is to help Christians think about these issues from a biblical worldview. Read our previous posts on Unity, Safety, "Christian Nationalism", Love, Courage, Forgiveness, the Resurrection and the Social Gospel, Loyalty, Identity, Religious Freedom, Communication, and Cancel Culture.

Even people who don't know the Bible have opinions about it. In my experience, the favorite verse of those who don't like the Bible is Matthew 7:1, which says, "Judge not, that you be not judged."

For many, this verse functions like a get-out-of-jail-free card that relieves them of the need to be concerned about anything else the Bible says. "Since God told you not to judge," they suggest, "your belief that I have done something wrong is the real sin." Whenever someone plays the Matthew 7:1 card, their sense of satisfaction is tangible. They believe they've beaten the Christians at their own game by using the Bible to prove that, if sin exists, it is the Christian who is the real sinner.

But is it true? Does Jesus' command in Matthew 7:1 forbid Christians from forming moral judgments about people's beliefs, behaviors, or ideas?

A fundamental rule of biblical interpretation is that Scripture must be interpreted as being consistent with itself. Most parents have told their children that they should not hit others. Does this mean that a parent is being hypocritical when, in another conversation, they tell their child to kick, scream, and "go for the eyes" if they are ever targeted by a kidnapper?

In the same way, Jesus was not contradicting the entire moral law when he said, "Judge not, that you be not judged." He was making a different point that, although related, is completely consistent with everything else He said.

The context of Matthew 7:1 is helpful for understanding its meaning:

It is clear that Jesus wants us to be more concerned with our own behavior than the behavior of others, and He wants us to live by the same standards we expect of others. In more contemporary terms, don't throw rocks from glass houses.

But it is unreasonable, considering everything else the Bible says, to conclude that making moral judgments is wrong. The apostle Paul tells Timothy that, "All scripture is inspired by God and profitable for teaching, for reproof, for correction, for training in righteousness" (2 Tim. 3:16). In his letter to the Galatian church, Paul reminds us that we have a duty to help those who are in sin to get out of it. "Brothers, if anyone is caught in any transgression, you who are spiritual should restore him in a spirit of gentleness. Keep watch on yourself, lest you too be tempted" (Gal. 6:1). None of this makes any sense if we are forbidden from recognizing when someone has done wrong.

Yes, the priority is always on our own hearts, but we cannot be indifferent to what others are doing.

Jesus' brother James described the importance of helping people walk away from sin: "My brothers, if anyone among you wanders from the truth and someone brings him back, let him know that whoever brings back a sinner from his wandering will save his soul from death and will cover a multitude of sins" (James 5:19-20). The book of Proverbs is dedicated to the pursuit of wisdom, but wisdom is impossible without regularly making judgments about people and circumstances. After all, wisdom is knowledge properly applied.

Far from forbidding moral judgments, Jesus told us how we ought to judge: "Do not judge by appearances, but judge with right judgment" (John 7:24). God shows us how to judge rightly when he selected David to be king, despite the fact that David did not have the appearance the Israelites expected of a king. "[F]or God sees not as man sees, for man looks at the outward appearance, but the Lord looks at the heart" (1 Sam. 16:7).

In addition, Christians should never condemn or claim moral superiority when making moral judgments. Christianity is egalitarian in the sense that it begins with the recognition that we are all equally guilty of sin (Rom. 3:23) and equally deserving of condemnation (Rom. 6:23). Since any righteousness we have is God's doing, not ours (Eph. 2:9), there is never a reason to feel self-satisfied.

Therefore, the Christian attitude in making judgments is compassion rather than condemnation or superiority. Paul made this point in his letter to the church in Thessalonica. "If anyone does not obey what we say in this letter, take note of that person, and have nothing to do with him, that he may be ashamed. Do not regard him as an enemy, but warn him as a brother" (2 Thes. 3:14-15). Although we must oppose evil and stand for truth, we do so out of concern for those in rebellion, rather than condemnation.

But there is another point that should not be missed. Many people who make arguments from Scripture don't actually care what the Bible says. If you're in a conversation with someone whose familiarity with the Bible begins and ends with Matthew 7:1, they are probably not trying to understand God's will for their life. It's just as likely that they are trying to render God irrelevant by quoting one part of the Bible that they believe nullifies the rest of it.

If that is happening in your world, be aware of it but don't fall for it. Learn the lesson of Matthew 7 by making sure that you are most concerned with your own holiness. In your interactions with the world, make sure that you have exchanged pride and judgementalism for love and compassion. But, by all means, keep your brain engaged; make good judgments about what is good and evil, helpful and unhelpful. It's crazy out there.