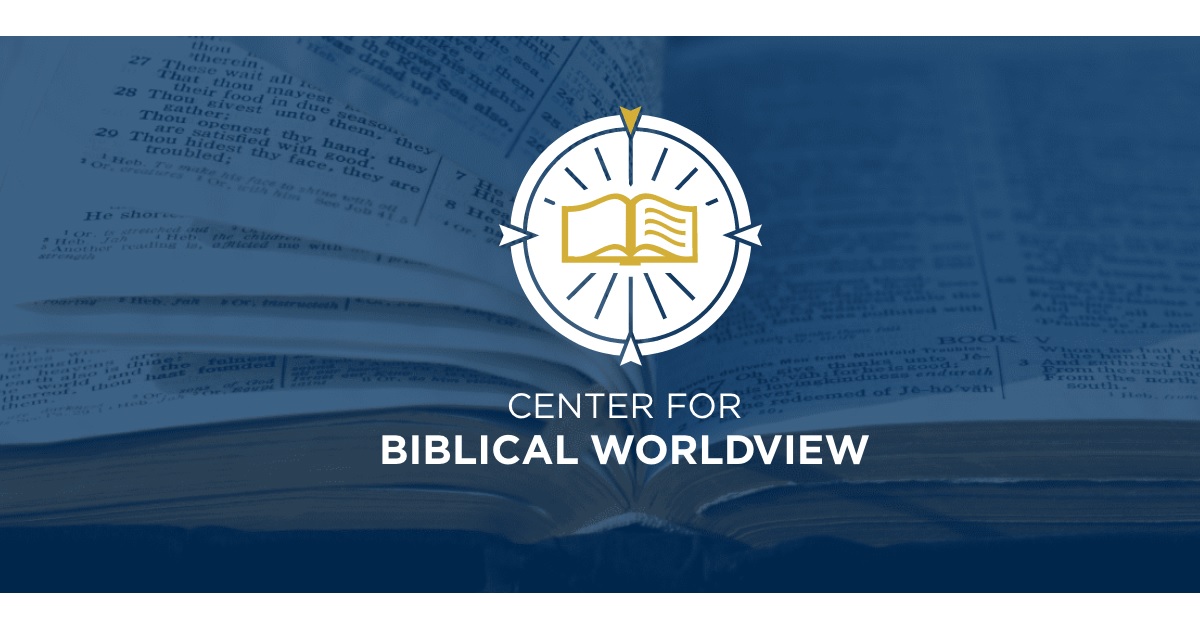 On "Worldview Wednesday," we feature an article that addresses a pressing cultural, political, or theological issue. The goal of this blog series is to help Christians think about these issues from a biblical worldview. Read our previous posts on Unity, Safety, "Christian Nationalism", Love, Courage, Forgiveness, the Resurrection and the Social Gospel, Loyalty, Identity, Religious Freedom, Communication, Cancel Culture, and Judging.

Earlier today, Family Research Council launched the Center for Biblical Worldview to equip Christians to think biblically and train them to advance and defend the faith in their families, communities, and the public square. To mark the occasion, FRC released the findings of a national survey conducted by FRC Senior Research Fellow George Barna. This survey provides new insights into how many Americans believe they possess a biblical worldview and to what extent they seek to integrate that worldview into every dimension of life.

The term "worldview" is derived from the word Weltanschauung, a combination of Welt (world) and Anschauung (view). German philosopher Immanuel Kant first used it in 1790 to refer to people's sensory perception of the world around them. But while the term "worldview" has only been in use for a few centuries, the concept of a worldview is not new. In fact, people have possessed worldviews since the beginning of human history.

So, what is a worldview? Simply put, a person's worldview consists of their core beliefs and convictions. It includes their answers--whether conscious or subconscious--to life's most fundamental questions about origin, meaning, morality, and destiny.

Here are some important things to know about worldview:

A worldview is not merely a cognitive or intellectual exercise; it includes our entire perspective on life, including what we love and worship, our guiding philosophies, affections, and everyday outlook on the world. A worldview is both intellectual and personal; it is a matter of both head and heart.

Every person lives and behaves according to a worldview--even if it is unconsciously formed or ill-informed. Even those who have not spent much time reflecting on what they believe are nevertheless ordering their lives around certain assumptions. We are creatures of faith; believing in things is an inescapable part of the human experience.

People often try to pin responsibility for their personal behavior or beliefs onto the culture at large. However, our collective worldviews shape the cultural norms. Anthropologists are skilled at analyzing the patterns of behaviors and values, but something even more fundamental undergirds those patterns--worldview.

Some people's worldviews are logically inconsistent. In fact, according to George Barna, 88 percent of Americans have a syncretistic worldview, meaning their worldview consists of a disparate collection of beliefs and behaviors. In other words, an overwhelming majority of Americans have a "cut-and-paste" approach to making sense of life, and many of the pieces they've assembled are incompatible. An example of a logically inconsistent worldview is contending that there is no such thing as truth--which itself is a truth claim.

On the other hand, even if a person's beliefs are logically consistent, they might not always apply them consistently. For example, someone with internally high moral standards and who believes cheating is wrong might nevertheless talk themselves into thinking that it is justified in their particular case, especially if they suspect that they were cheated by someone else first.

A biblical worldview is essential to the Christian life.

For Christians, the basis of our worldview is the Bible, consisting of both the Old and New Testaments. Christianity teaches that the biblical God, Yahweh, is responsible for all life and purpose. Christians believe that God is triune (i.e., three in one) and has revealed Himself to humanity in the form of the second person of the trinity, Jesus Christ. A biblical worldview sees life through a fourfold framework of creation, fall, redemption, and restoration.

Because a biblical worldview is first and foremost a worldview rooted in and shaped by the truth of God revealed to mankind through His Word, it is imperative that Christians build their lives on it. Jesus spoke about the importance of a solid foundation in His parable of the man who built his house upon the rock. When the rain, wind, and floods came, his house stood firm, unlike the house built on the sand that was washed away and destroyed (Matt. 7:24-27).

Whenever a Christian's worldview is inconsistent with the truth contained in the Bible, or whenever they inconsistently apply it, they are in danger of falling like the house built on the sand. Christians can avoid this fate by building their house on the rock--the Word of God. When Christians familiarize themselves with truth and put on "the mind of Christ" in everything they do, they will have a solid foundation.

Thus, because of the foundational role of God's Word in developing a biblical worldview, FRC's Center for Biblical Worldview will be guided by the following beliefs about the Bible:

We believe that Jesus Christ created all things and rules all things and that He Himself is truth. We believe the Bible is God's inerrant, infallible, and authoritative Word and that submitting our lives to it should be the goal of everyone who seeks to follow Christ. Furthermore, we believe that the Bible offers the most rational and satisfying answers to life's most fundamental questions, including:

We believe a person exhibits a biblical worldview when their beliefs and actions are aligned with the Bible, acknowledging its truth and applicability to every area of life.

This high view of Scripture will undergird the Center for Biblical Worldview's approach to the political, cultural, moral, and theological issues of our day. It will inform everything we hope to produce, including curriculum, books, videos, and other content.

The Center for Biblical Worldview hopes to serve churches and contend for truth in the public square for years to come. As the broader culture continues to turn against Christians, we will stand firmly on God's revealed truth. As Christian sexual ethics are increasingly maligned as outdated or harmful, we will winsomely articulate and defend God's design for the family, marriage, and sexuality. And as even some in our churches are tempted to compromise truth for the sake of popularity or comfort, we will remain steadfast, regardless of popular opinion or shifting cultural norms.

We want to be a voice to and for those who love Jesus and are committed to Scripture. We commit to coming alongside pastors and churches and contending together for the faith (Jude 1:3). As Jesus promised, persecution and hostility toward believers are ever-present--and increasing. FRC's Center for Biblical Worldview is here to equip those committed to honoring God in all areas of life.

Visit FRC.org/worldview to learn more about the work of FRC's Center for Biblical Worldview.