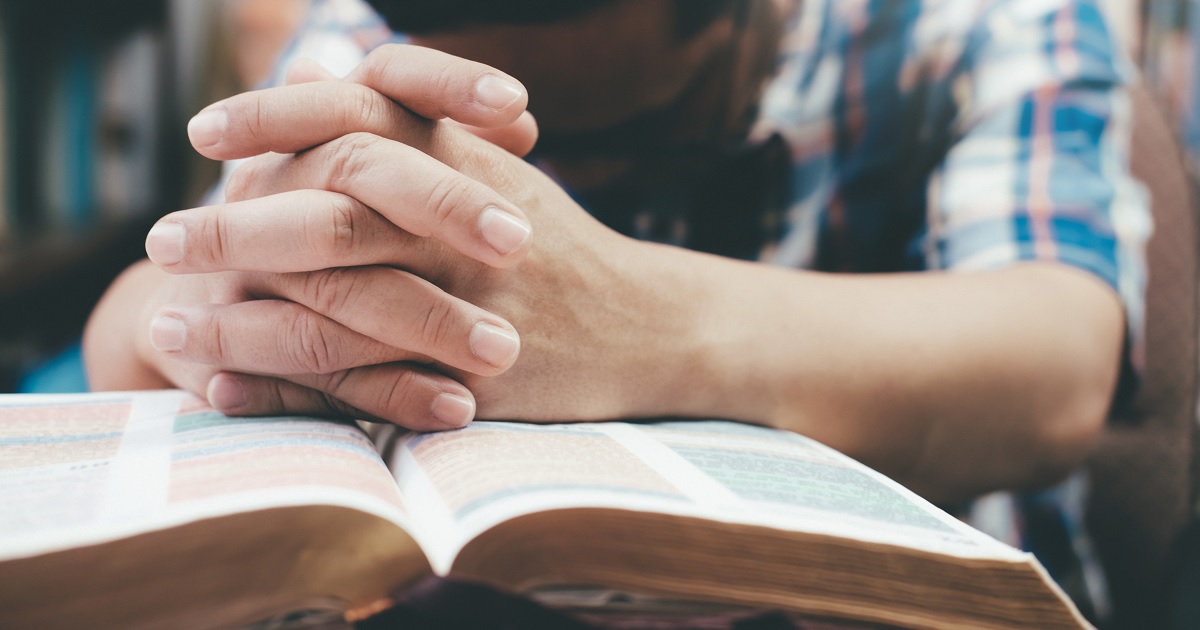 "What if the word 'homosexual' was never meant to be in the Bible?" That is the question the new documentary 1946: The Mistranslation that Shifted a Cultureis dedicated to answering.

The documentary explores the linguistic history of the word "homosexual" and its appearance in the Revised Standard Version (RSV) of the Bible, first published on February 11, 1946. In short, the film seeks to show that the RSV's use of the term "homosexuals" instead of "sexual perverts" is an inaccurate translation of the Greek words malakoi and arsenokoitai. (It is worth noting that although recent editions of the RSV have reverted to using "sexual perverts," many other translations still translate it as "homosexuals.") According to the documentary, homosexual sex is biblically permissible, and the RSV's "mistranslation" has influenced subsequent English translations of the Bible, resulting in Western society believing that "sexual and gender minorities must choose between their faith and their identity."

The filmmakers insist 1946 is "not an attack on Christianity or the Bible" but rather "a quest to discover biblical truth and honor God's Word." However well-intentioned the film might be, its ultimate claim does not stand up to linguistic and historical critique. 1946 undermines biblical sexual ethics under the guise of honest hermeneutics.

Alan Shlemon from the Christian apologetics ministry Stand to Reasonwrites that, despite 1946'scaptivating premise where power-hungry white men oppress "sexual minorities" through Bible translation, "Even if the film's claims are true, it doesn't matter. The entire documentary is a non sequitur."

There are many reasons the film 1946 fails to be intellectually compelling, including:

Despite these realities, the documentary is often cited as proof that the Bible does not condemn homosexuality and that the church should re-examine its view on sexual ethics.

To address the film's claim that same-sex relations are not prohibited in the Bible, we will answer three questions:

By answering these questions, Christians can refute the radical claim that the Bible permits homosexual sex with knowledge, clarity, grace, and love.

1. What Do the Allegedly Mistranslated Words in 1 Corinthians 6:9 Mean?

The contested phrase translated "men who practice homosexuality" comes from the Greek "ο¿τε μαλακο¿ ο¿τε ¿ρσενοκο¿ται," transliterated as oute malakoi oute arsenokoitai. The phrase oute...oute means "neither...nor," so the verse is saying "neither _____ nor _____ ... will inherit the kingdom of God." So, we must fill in the blanks. What do malakoi and arsenokoitai mean?

In his book The Bible and Homosexual Practice: Texts and Hermeneutics,Dr. Robert A. J. Gagnon explains that the term malakoi can carry a variety of meanings depending on the author and context. Often it meant "soft" or "effeminate." In ancient usage, malakos could range from those who had a penchant for "soft" or decadent living, to those averse to the rigor of a philosopher's life, to the passive partner in homosexual intercourse. Thus, while at first glance it might seem challenging to know exactly how Paul is using the term in this passage, context is key. Based on the context of 1 Corinthians 6:9--a list of unrepentant sins displayed by those who will not inherit the kingdom of God--and Jewish understanding of the term at the time, Paul's intent is clear. As Gagnon summarizes, "In 1 Cor. 6:9, malakoi should be understood as the passive partners in homosexual intercourse" (p. 312).

So, if Paul's use of malakoi referred to the passive partner in homosexual sex, what about the active partner? To address this question, Paul uses the term arsenokoitai,a compound word formed by combining arsen ("male") and koites ("bed"), the same words found in Leviticus 18:22 and 20:13 (passages which clearly prohibit homosexual relations). This word has a decidedly narrower meaning than malakoi. In fact, a survey of ancient literature shows arsenokoitai always refers to men having sexual intercourse with other males. As Gagnon points out, this is true of the earliest attestations of arsenokoitai after the New Testament, including the Sibylline Oracles (2.73), Hippolytus' Refutation of All Heresies (5.26.22-23), andEusebius' Preparation for the Gospel (6.10.25). According to Gagnon, Paul's use of arsenokoites instead of paiderastes shows that he was not just discussing the practice of pederasty (a man having sexual intercourse with a boy), but also a man who was the active partner engaging in sexual intercourse with another adult male (p. 325). In summary, based on the historical and literary contexts of the terms and the literary context of 1 Corinthians 6:9-10, malakoi and arsenokoitai clearly refer to passive and active partners in homosexual sex.

2. What Is the Biblical Sexual Ethic?

The mere suggestion that Scripture might not prohibit homosexual sex is understandably tantalizing, for many reasons. At one point or another, we have all wished that one of the sinful behaviors prohibited by the Bible was permissible in our specific case. These activities, although condemned by the Bible, nonetheless appeal to our hearts.

Tragically, we have inherited our penchant for forbidden things from our first parents. When Adam and Eve attempted to "become like God" by eating the fruit of the forbidden tree in the garden of Eden, the consequences of their disobedience to God affected not only themselves but all their offspring (Gen. 2:17, 3:16-19). One consequence is that our hearts are deceitful and desperately sick (Jer. 17:9). Even if we feel in our hearts that something is right, that thing could very well be wrong. Proverbs 3:5-8 cautions us:

Trust in the LORD with all your heart,
and do not lean on your own understanding.
In all your ways acknowledge him,
and he will make straight your paths.
Be not wise in your own eyes;
fear the LORD, and turn away from evil.
It will be healing to your flesh
and refreshment to your bones. (Emphasis added)

Sadly, humanity's struggle with God's design and intention for sexual desire is yet another consequence of the fall.

As Family Research Council's Biblical Principles for Human Sexualityexplains, church history reveals one unified position about sexual ethics--that of strict condemnation of any type of sexual activity outside of marriage. It was only after the sexual revolution of the 1960s that some American churches--those that had previously embraced theological liberalism--changed their interpretation of the Bible and began to approve of homosexual sex and same-sex marriage.

3. Why Is the Biblical Sexual Ethic Good News for Everyone?

The Bible's high standard for sexual ethics can seem unattainable, causing us to despair. But the Bible brings good news of redemption and promises salvation to anyone who puts their faith in Jesus Christ. In Christ, we are given victory over sin and receive power from God to flee temptation. That is why Paul urges the Corinthians to "flee from sexual immorality" later in the same passage of 1 Corinthians 6 (1 Cor. 6:18). He was urging them to walk in the freedom that Christ had already won for them!

When 1 Corinthians 6:9-10 is read in context, we learn that it is a passage of hope, not condemnation. Paul writes:

[D]o you not know that the unrighteous will not inherit the kingdom of God? Do not be deceived: neither the sexually immoral, nor idolaters, nor adulterers, nor men who practice homosexuality, nor thieves, nor the greedy, nor drunkards, nor revilers, nor swindlers will inherit the kingdom of God. And such were some of you. But you were washed, you were sanctified, you were justified in the name of the Lord Jesus Christ and by the Spirit of our God. (1 Cor. 6:9-11, emphasis added)

In the last sentence, Paul reminds the Corinthians of the new life they have received in Christ! Even though some of them had previously lived immoral lives, the blood of Christ's sacrifice had washed them, sanctified them, and brought them into a right relationship with God. The Bible's teaching on sexual ethics is good news because it reveals God's design and plan for marriage, relationships, and sexuality. It is even better news for those of us who struggle with sexual sin because, through "participation in the spirit" (Phil. 2:1), we can "say 'No' to ungodliness and worldly passions, and to live self-controlled, upright, and godly lives in this present age" (Titus 2:12 NIV).

In Matthew 11, Jesus says, "Come to me, all who labor and are heavy laden, and I will give you rest... For my yoke is easy and my burden is light" (v. 28). Throughout the centuries, millions of us who follow Jesus have found comfort in this precious promise. For those who grapple most acutely with the burdens of living in a sexually broken world, Jesus' promise of rest still stands. Amid life's most trying struggles, trust Him with your hopes, desires, fears, and questions. Jesus is faithful, trustworthy, and true (1 Thess. 5:24, Rev. 19:11). He completely saves those who believe and empowers us to live the life our loving God designed us to live.