A Parent's Guide to the Transgender Movement in Education 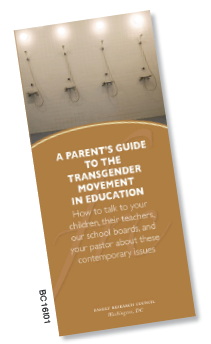 Why are we hearing so much today about the transgender movement in general, and about who should use which bathroom, locker room, and shower in particular? And how does this affect your child's school? Family Research Council (FRC) is pleased to offer this concise guide for parents to understand what is happening in American culture and schools today, and what you can do about it. What Does "Transgender" Mean? The term "transgender" is now commonly used to refer to people who identify psychologically with the opposite sex from what they actually are biologically.

A person who was born biologically male, but who wants to be, or feels psychologically that he actually is, female, would be considered transgender; as would a person born biologically female who wants to be, or feels she is, male. (Some people who selfidentify as transgender rebel against what they call "the gender binary" by refusing to identify as male or female.) Note that identifying as transgender is completely different from being "intersexed" that is, having a "disorder of sexual development" (DSD) which makes the person?'s biological sex at birth ambiguous.

Most people who identify as transgender do not have a biological intersex condition. While some people have "gender reassignment surgery" to alter the appearance of their bodies, this is not considered necessary to adopt a "transgender" identity. After extensive lobbying by transgender activists, in 2013 the American Psychiatric Association changed its diagnosis of the transgender condition as "Gender Identity Disorder" to "Gender Dysphoria." (The change was intended to suggest that it is not the gender identity issue, but only the subjective distress it causes, that is problematic.)