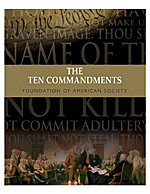 The American experiment in ordered liberty presupposes the existence of a Supreme Being who instituted a universal moral code. As the Declaration of Independence reminds us, this code is "self-evident." Indeed, the Declaration enshrined this simple yet powerful truth, that "unalienable rights," or basic human rights, do not come as a gift from a ruling elite, such as kings and rulers, parliaments and legislatures, judges and courts; rather, natural rights come from God.

The Founding Fathers went out of their way to acknowledge God no less than four times in the Declaration: