A Clear and Present Danger: The Threat to Religious Liberty in the Military - Volume II 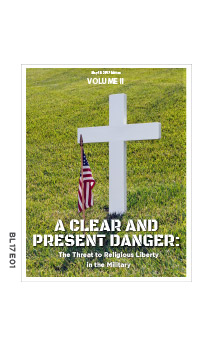 In 2013, Family Research Council grew increasingly concerned about various actions by the Obama administration's Department of Defense that curtailed the rights to religious freedom and expression enjoyed by members of the U.S. armed services for over two centuries. Once a cherished ideal, religious liberty became suddenly endangered. The brave men and women charged with defending our rights were the very citizens now threatened with losing the first, and most important of those foundational rights. Accordingly, FRC decided to chronicle these events in a publication first released in June, 2013 entitled, "A Clear and Present Danger: The Threat to Religious Liberty in the Military." Updated editions were released in subsequent years, with the last edition published in June, 2015.

With the departure of President Obama and the advent of President Trump's administration, we recognized the need to update our tracking of anti-religious actions being taken by the armed forces and the Veterans Administration. This second volume picks up in the summer of 2015, and describes major events that have transpired since then -- including some that have occurred under the new administration.

One thing is clear. It is not necessarily the case that these vast bureaucratic agencies (the armed forces and the VA) will treat their employees' religious rights with greater respect merely because a Republican president is in the White House. These massive organizations will require the enormous effort and determination of like-minded individuals to restore and protect the religious freedom guaranteed to all Americans.

We are encouraged by President Trump's initial step of May 4, 2017. The signing of Executive Order 13798, intended to promote free speech and religious liberty, certainly gives us cause for hope in both the armed forces and the VA. But not all the news is encouraging. One of the most recent entries in the current edition involves the failed nomination of Tennessee State Senator Mark Green (M.D.). Senator Green is a decorated combat veteran, a physician, and a West Point graduate. He is also an evangelical Christian who was attacked viciously by the LGBT Left. As is typical of such matters, neither Republicans in the Senate nor Secretary of Defense James Mattis appear to have supported Senator Green rigorously.

Does this mean that no person publicly holding orthodox Christian beliefs on sexual morality, marriage, or abortion is capable of holding a government position requiring Senate confirmation? We shall see how the Trump administration takes on the bureaucrats entrenched from the previous administration, one for whom religious liberty seemed to be the privilege of the few, not the right of all.