Save Adolescents from Experimentation (SAFE) Act 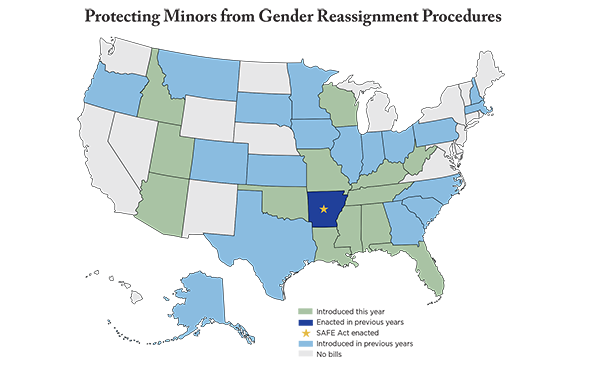 Family Research Council actively recommends and supports the Save Adolescents from Experimentation (SAFE) Act. One’s sex is never “assigned at birth”; it is always objective and observable by time of birth. Propagating an ideology of fluid sexuality not only undermines a scientific understanding of human anatomy but also damages the lives of the next generation. The staggering growth of transgenderism has left children vulnerable to life-altering procedures such as puberty-blocking drugs, cross-sex hormones, and irreversible surgeries. These unscientific, destructive gender transition procedures should not be allowed to interrupt the development of children and irreversibly alter their bodies. The SAFE Act addresses this critical need.

In 2021, 21 states introduced bills banning gender transition procedures on minors; so far in 2022, 13 states have introduced similar legislation. In April 2021, Arkansas became the first state in the nation to enact such a law, establishing strong protections for other states to use as a model. Some bills include criminal penalties. Others make gender transition for minors “child abuse.” Many do not address insurance coverage. We believe that a more carefully-calibrated approach is warranted.