100 Years After the 19th Amendment, Another Right the Suffragists Fought for is Still Unsecure 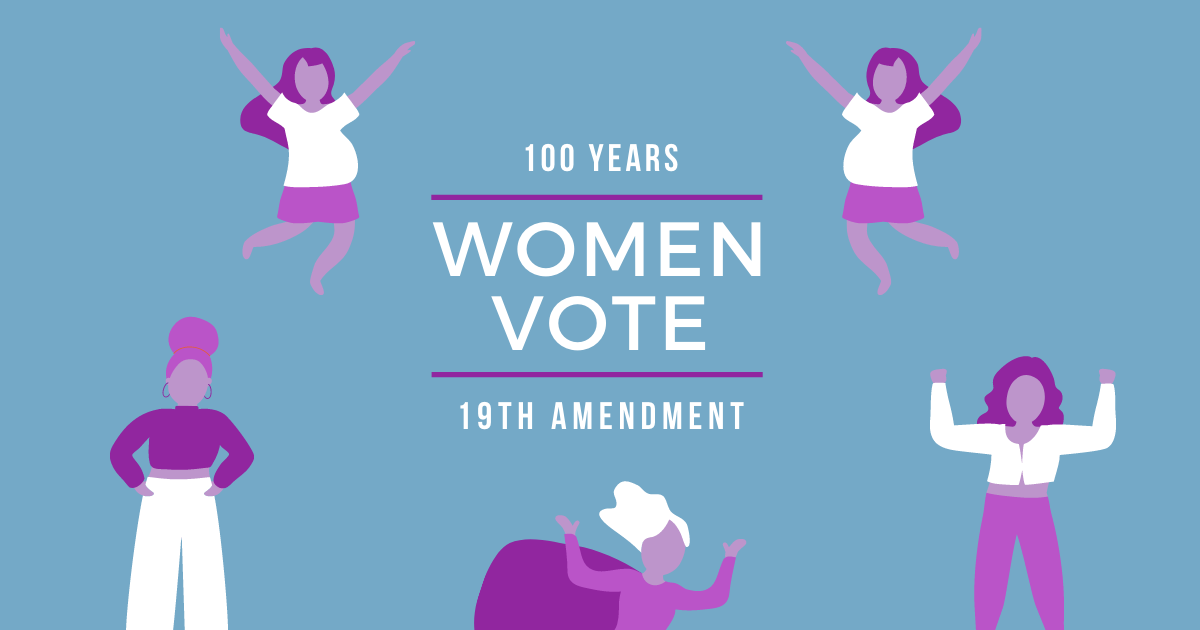 We hold this truth to be self-evident, that all women are endowed by their Creator with the same certain unalienable rights as men, that among these are life, liberty, and the pursuit of happiness.

One hundred years ago today, on August 18, 1920, the United States of America effectively affirmed this truth by ratifying the 19th Amendment (also known as the "Susan B. Anthony Amendment") to the Constitution, thus securing American women's right to vote:

The right of citizens of the United States to vote shall not be denied or abridged by the United States or by any State on account of sex. Congress shall have power to enforce this article by appropriate legislation.

It is right and good for our government's laws to acknowledge the unalienable rights and human dignity of women. Not only do these rights emanate from the Creator, but they also exist because women--like their male counterparts--are God's image-bearers. As I wrote in a previous blog analyzing the preamble of the Declaration of Independence:

[O]ur worth and dignity as human beings is directly contingent upon the identity of our sovereign, omnipotent Creator. Those who bear the Creator's image (all humans) are due a certain type of treatment from their fellow image-bearers [...] Such due treatment can be said to be "unalienable" in the sense that our status as God's image-bearers cannot be taken away.

Governments are instituted for the purpose of securing humans' unalienable rights, our Declaration explains. These governments, if just, derive their powers from the consent of the governed. In America, suffrage (the right to vote) is a key ingredient in giving one's consent to be governed. By securing the right to vote, American women finally joined men in being able to give their consent to the government tasked with securing their unalienable rights.

The State Department's recently launched Commission of Unalienable Rights cited the 1848 Seneca Falls convention, notable for propelling the women's suffrage movement, in its inaugural report. It was at this convention that suffragist Elizabeth Cady Stanton appealed to the unalienable rights found in the Declaration of Independence: "[S]trange as it may seem to many, we now demand our right to vote according to the declaration of the government under which we live . . . The right is ours. Have it, we must. Use it, we will."

But while American women have secured the right to vote, they have yet to wholly secure a much more fundamental right, the first right enumerated in the Declaration of Independence: life.

Today, a significant portion of our nation's political discourse revolves around women's rights. Not if women deserve rights, mind you, but what is to be included among those rights. Some believe "reproductive rights"--the ability for women to obtain contraception and abortions--ought to be included in the list.

However, early feminists, including members of the American women's suffrage movement, saw abortion in a very different light than the self-proclaimed pro-choice feminists of today. They viewed abortion as being an unjust outcome of men's exploitation of women. In her book A Vindication of the Rights of Woman (1792), Mary Wollstonecraft condemned such acts: "Nature in everything deserves respect, and those who violate her laws seldom violate them with impunity."

Serrin M. Foster, president of Feminists for Life of America, observes about the American suffragists:

Without known exception, the early feminists condemned abortion in no uncertain terms. In the radical feminist newspaper The Revolution, the founder, Susan B. Anthony, and the co-editor, Elizabeth Cady Stanton, refused to publish advertisements for "Foeticides and Infanticides." Stanton, who in 1848 organized the first women's convention in Seneca Falls, N.Y., classified abortion as a form of "infanticide" and, referring to the "murder of children, either before or after birth," said, "We believe the cause of all these abuses lies in the degradation of women."

Abortion's degradation of women hasn't been left in the distant past, either. Today, American women are expected to be sexually available to the men they date, and then expected or even pressured to abort an unexpected or unwanted pregnancy. Men often face little to no consequences for their sexual behavior, whether consensual or nonconsensual, and abortion--by eliminating the children produced by their actions--makes holding men accountable even less likely. Worse yet, in other countries, abortion and sterilization have--and presently are--being used as tools of genocide.

Contrary to a commonly-held belief in our culture, supporting women's rights and opposing abortion are not at odds. A culture in which women's bodies can be used for sexual pleasure by men and then discarded, together with any resulting human life, is not a culture that upholds women's unalienable rights or recognizes their human dignity.

It isn't just adult women who have been harmed by the prevalence of abortion. Millions of girls were never allowed the chance to grow up, consent, vote, dream, or earn any kind of wage because they were aborted before they were born. Some are aborted due to sex discrimination: untold numbers of girls worldwide have been aborted due to their sex. The first right enumerated in our nation's Declaration of Independence is life, yet it is still denied to so many.

It is right and good for governments to acknowledge the unalienable rights and human dignity of women. The United States did this one hundred years ago, with the ratification of the 19th Amendment to the Constitution. But there is much more that we can do for women's rights, including defending them both in and outside the womb.