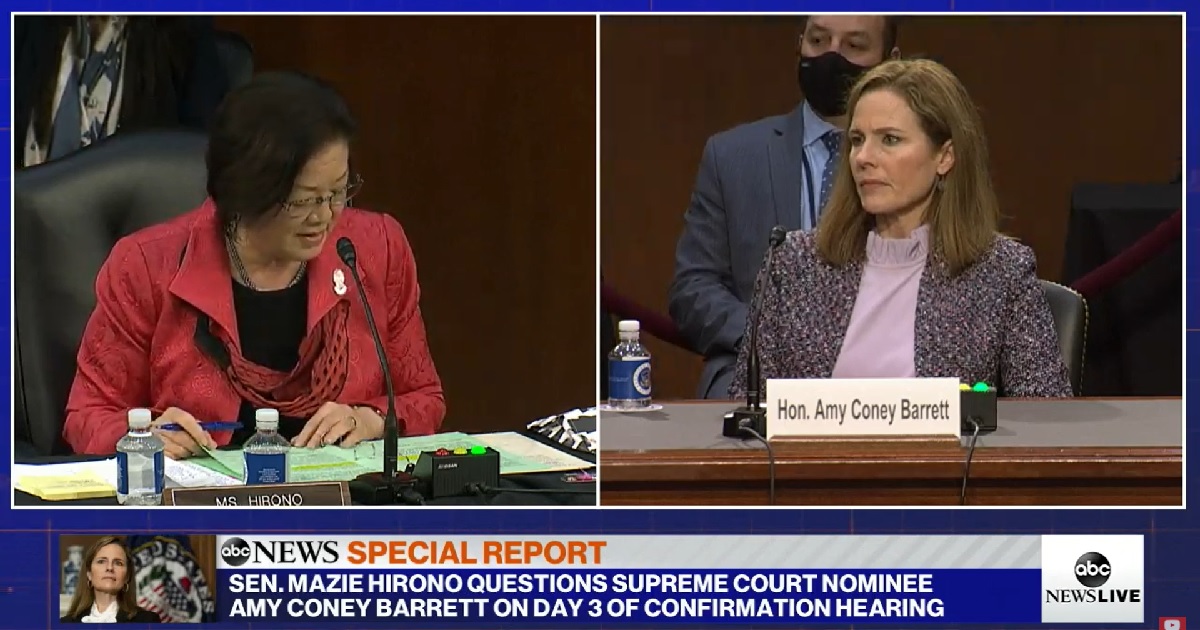 Throughout the last several days of Senate Judiciary Committee Democrats using Amy Coney Barrett as a political prop for their re-election campaigns (and antagonism toward President Trump), Senator Mazie Hirono from Hawaii turned in one of the worst performances on day three of the confirmation hearing--exhibiting a tone-deafness to religious freedom that was almost bizarre.

Among her list of cases on a giant poster-board supposedly showing that the sky would fall if Barrett is confirmed, Hirono included South Bay United Pentecostal Church v. Newsom, which she claimed is putting "COVID safety measures" at risk.

Yet, South Bay is a case in which the Supreme Court refused to step in and protect a church from being discriminated against under coronavirus restrictions, after California continued to treat religious worship gatherings less equally than "factories, offices, supermarkets, restaurants, retail stores, pharmacies, shopping malls, pet grooming shops, bookstores, florists, hair salons, and cannabis dispensaries" under its approach to the coronavirus.

Why is Hirono using a case in which a church is being shut down to claim that coronavirus restrictions are at risk? Either she devalues religious freedom that much, or is blind to the needs of such churches.

But that church's pastor, Amada Huizar, is not. He has had to face the very real and serious consequences of what has happened because churches have been unconstitutionally shuttered around the country: harm to communities and the people who live in them. Pastor Huizar recently joined FRC President Tony Perkins on Washington Watch to share the incredible life-and-death story of his decision to reopen his church, and spoke at Freedom Sunday, an event held to call on churches to reopen in the face of unconstitutional restrictions on them around the country.

Senator Hirono may simply be tone-deaf to the religious freedom rights of Pastor Huizar and others like him. The alternative is that she thinks so little of the First Amendment that she's willing to use a case suppressing a church's rights in her bid to block Judge Barrett's confirmation. Either possibility is dismal in terms of respect for our First Amendment and the Constitution.